It takes commitment and dedication to achieve a goal. And this was the motivation that has driven a man from North Carolina to do everything to bring back a lost pooch to its owner.

Jason Gasparik was casually driving one Friday night when he noticed someone running on the field while his car was parked on a strange part of the road. He got curious about what he was witnessing, so he went down to check it himself.

Upon going down, he noticed that a man was chasing a dog. Jason observed that the dog continuously ran in circles looking scared and confused. The dog, however, was both playful and quite apprehensive.

Jason and the man did their best to calm the scared pup until they were able to lead it into Jason’s car. After that, Jason drove the dog to the nearest veterinarian in the hopes of having it scanned for a chip. Unfortunately, the chip embedded in the dog was unregistered.

Luckily, he was able to track down the dog’s breeder through the chip ID number. The problem was, the owner was difficult to contact due to lack of information.

Determined, Jason then turned to the streets to locate the puppy’s owner. He tried out several ways, but when none of the usual strategies worked, he decided to go on the busy corner in Charlotte, stood there, and held a sign saying, “Do you know this lost dog?”, hoping that the owner would catch a glance of it. 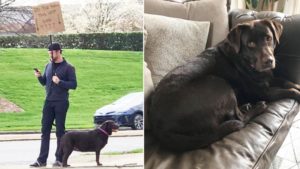 The next thing Jason knew, he has gone viral in the local news and social media with his photo exerting effort to locate the dog’s owner. Jason remarked, “Going viral was amazing! There were a thousand shares already from just one post by a concerned lady.“

The next day, Jason went back to the same corner, and in that afternoon,  a lady named Cheryl approached him and said that she knows the dog and its owner. It turned out that the dog’s name was Roxy, and its owner was Ed.

Jason couldn’t be happier that he has finally accomplished his mission. “When Roxy saw Ed, she was ecstatic!“, Jason recalled. He added, “It would be helpful if dog owners will make sure that their pets are chipped and that these chips are registered. They should not assume that it is registered once they install it after paying for it.”

Indeed, a microchip is a good investment. And thanks to Jason who thought of and did every possible way to reunite a lost dog to its owner.